Redesigning Life – Eugenics, Biopolitics, and the Challenge of the Techno – Human Condition 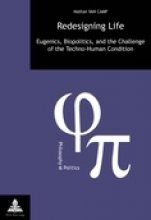 The emerging development of genetic enhancement technologies has recently become the focus of a public and philosophical debate between proponents and opponents of a liberal eugenics – that is, the use of these technologies without any overall direction or governmental control. Inspired by Foucault’s, Agamben’s and Esposito’s writings about biopower and biopolitics, the author sees both positions as equally problematic, as both presuppose the existence of a stable, autonomous subject capable of making decisions concerning the future of human nature, while in the age of genetic technology the nature of this subjectivity shall be less an origin than an effect of such decisions. Bringing together a biopolitical critique of the way this controversial issue has been dealt with in liberal moral and political philosophy with a philosophical analysis of the nature of and the relation between life, politics, and technology, the author sets out to outline the contours of a more responsible engagement with genetic technologies based on the idea that technology is an intrinsic condition of humanity.